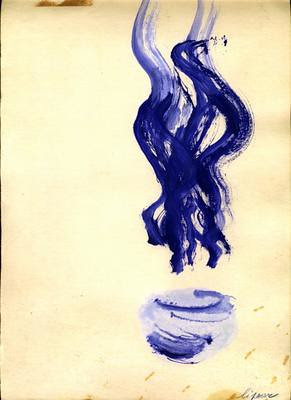 I have to be careful not to assess actions as if there were some objective correlation between any deed and what I can anticipate as its result. It is a bit of psychological shorthand, often inspired by the pace in which we try to process information/experience these days. However, the price of this convenience is that we might not look deeply enough into the act and its initiator to recognize its true character. After all, it is primarily the motivation/intention of any action that will determine it final nature.

Look within the mind that conceived the goal if you seek the tools to judge the value or success.—Strike a Chord of Silence, CG Walters

Alan Watts is a philosopher that I have always enjoyed, mostly because of his combination of insight and unwillingness to take anything too seriously—at least that was the persona of his lectures. In an example of assessing the truest nature of one particular action that is easily categorized—war—this (unfortunately) eternally relevant quote from his book, “The Way of Zen” seemed particularly pertinent in the world today.

“It is a basic Confucian principle that it is [a person] that makes a truth great, not truth that makes [a person] great. For this reason, ‘humanness’ or ‘human-heartedness’ (jen) was always felt to be superior to ‘righteousness (i), since [people themselves are] greater than any idea which [they] may invent. There are times when [people’s] passions are much more trustworthy than their principles. Since opposed principles, or ideologies, are irreconcilable, wars fought over principle will be wars of mutual annihilation. But wars fought for simple greed will be far less destructive because the aggressor will be careful not to destroy what he is fighting to capture. Reasonable [humans] will always be capable of compromise, but [people] who have dehumanized themselves by becoming blind worshipers of any idea or an ideal are fanatics whose devotion to abstractions makes them enemies of life.”

In reading this, I was taken with several points:
1) There is at least some benefit to greed (and other ‘bad’ traits, etc.—if we see from a broad enough perspective)

2) Ideologies are irreconcilable, but not people

For those of you who would like a quick re/introduction to Alan Watts, try these videos http://deoxy.org/watts.htm

Receive new editions of Into the Mist through a reader

Join me as a friend at any of my favorite hangouts: Facebook, StumbleUpon, Friendfeed , Twitter, Plurk, or Digg

In celebration of CG’s upcoming non-fiction book, Strike a Chord of Silence, for a limited time autographed/signed copies of C.G. Walters’s current novel, Sacred Vow from the author are available.
Posted by CG Walters at 6:43 PM