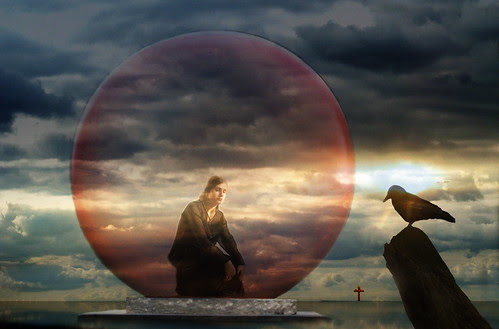 photo by by h.koppdelaney

Over the next couple of months, three times per week I intend to serialize installments of the first 15 chapters of Sacred Vow. For those of you who have already read Sacred Vow, I beg your patience, and welcome any comments that you remember from when you read the chapter.

For those of you who have not read Sacred Vow, may it bring you many blessings. And, please comment if you are so moved.

There is a rift in the Collective Consciousness of the Universe because people are not bonding one to another. The primary female character, Katerina, lives in another dimension, in a culture structured around the Sisterhood of Crones (a description of the order, not their name–as their name is without word). The Sisterhood are about to perform a ritual to allow Katerina to rapidly visit a multitude of worlds and dimensions,
searching for her spirit mate (soulmate or twin flame). The Sisterhood has become aware that the connection between Katerina and her spirit mate is vital to heal the rift in the Collective Consciousness.

Choice of the ritual location was dictated by nature just days before. Hundreds of people had roamed hill and field, dowsing for the place possessing the energy necessary for their purpose. The intended process could not take place on one of their customary ceremonial sites, but only the spot identified as radiating the strongest flow of earth energy at the anticipated time of the rite.

Three ley lines, channels of the land’s energy, crossed a wooded hillside in a small patch of flat ground. Two ancient hardwood trees, one standing on either side of the rear of the opening, leaned forward before the rocky slope that bordered the backside of the level area. Their leaves filtered what little light could make its way from above.

Between the trees, at the base of the slope, there was a large greenish-gray stone. Its jagged face rose some twenty feet in the air. Three small streams, swollen with recent rains, flowed down the slope, marking the perimeter of the flat plot of land in front of the stone, before converging and flowing downward over a small waterfall. The stream-encircled ground was carpeted with a thick, soft moss.

Once the location had been identified and verified, the holy women who would use that place and its energy consecrated it. On the appointed evening, shortly after midnight, a ceremonial procession of The Nine—which consisted of the Crone Mother, leader of their mystic order, and eight more of the wisest women of their society—Katerina, understudy to the Crone Mother, and their considerable entourage made their way to the location. For several hours, from their village to the south, those who remained behind could see the winding line of torches, and hear the repetitive chants as the group made their way to the anointed site.

Once the group arrived, still in the dark of the night, attendants placed
torches around the perimeter of the chosen site. Then they spread seating mats in a large circle on the ground for those who would perform the ritual, with the Crone Mother’s back to the large boulder at the head of the flat ground. Katerina took her position, in the center of the circle, facing the Crone Mother. Once the members of the ceremony were seated, their retinue withdrew some distance from the site, in order not to disrupt the proceedings.

A time of silence then passed among those women remaining on the holy site, Katerina and The Nine. When no more sound of those traveling back down the hill could be heard, The Nine began a unified chant. Katerina remained silent, yielding to the trance induced by their voices. As planned, the light of dawn had just begun to make its way through the canopy of leaves.

Within a very short time, the chanting ended, but Katerina was not aware of the change. Where she had gone, The Nine could not follow, could not see what Katerina saw. Their task was now to assist Katerina in a search through her parallel lives, and to wait until she chose to return.

Hours passed as Katerina moved through the many complementary realities surrounding her—now made apparent to her by this expanded awareness—searching more than any of The Nine had anticipated as possible. The light of dawn, noon, and now late evening had filtered through the tree cover above the seated women.

Despite her travels, Katerina remained attuned to every mind and spirit involved in the ritual. She was well aware that several of the wise ones had long been wishing for her to conclude her efforts, worried not for themselves but for Katerina and the conceivable limits of her stamina. Katerina knew they would stay with her as long as she could convey assurance that she was not in any danger.

Being surrounded by the Council of Nine evoked such power and information that it was almost too much for her mortal body to endure. Each of The Nine was unequaled in her individual expertise. And all that power was being focused into a narrow beam, directly at Katerina. Fortunately, the most illuminated teachers in their culture had trained Katerina all her life for such a passage.

The collective life force of The Nine permeated every cell of Katerina’s body, which resonated with an enhanced energy, supporting and shielding her from much of the impact of her transitions. Alone, she would not have been able to investigate so much, so quickly. Conversely, being assailed by their concentrated radiance was having a brutal impact on her physical form.

Katerina was always able to enter her parallel lives without the help of The Nine. In fact, she had entered into many parallel lives since being made aware of “him” a few months ago. In those unassisted visits, she could visit only one location per session, and then had to return home, resting for some extended period before traveling again. That process had proven to take far too long. It did, however, have its benefits.

Returning home between visits was necessary for Katerina’s mind and spirit to filter the visited life back into the generally unperceivable background of her unconscious mind. Interim filtering wasn’t happening today. This ritual was allowing Katerina to open up to alternate lives, giving each life predominance in her consciousness, just long enough to allow her to seek out what she needed to know, and then pull away from that place. Full disconnection from these lives would have to take place when she finally returned home at the end of the ritual. Today she pushed herself forward as she never had before. More than just her life and her world depended on the outcome.

C.G. Walters primarily writes fiction that focuses on the multidimensionality of our loves and our lives.

Please join me as a friend at any of my other favorite hangouts:
Facebook, Gaia, Myspace, StumbleUpon, Friendfeed, Twitter, Plurk, or Digg

Beautiful visions....I imagine this world, or these worlds, were once the root of our filial bonds to one another and the Earth, and the "medicine without molecules" administered through intention or vibration, the all-pervasive medium of healing. Now, after a series of massive cullings and "witch-hunts," many of these lineages of healing and beings of light and love migrated into the subtler integuments of embodiement - and you now flesh them out for us, so beautifully. As you say: "but what fact is not ripe for becoming fiction?" This ripening into fiction demonstrates clearer all greater truth can not decompose themselves into factual prose.

Thank you, Sayer Ji.
Since every atom of the universe contains the whole, the greater truths cannot be eradicated despite all the witch hunts. It may have reduced its expression, but those truths are growing to the forefront again.