Community of the Mountain 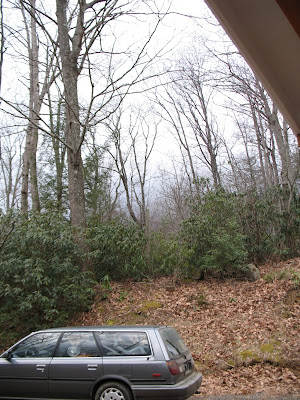 I need my hikes up the mountain--body, mind, and spirit! Weekend before last was so brutally cold that I did not have suitable gear for the top of the mountain. Last weekend I was so sick that I could hardly breathe. Though I still had some some lingering effects of my illness, I was determined to go up.

I was sure I could make it.

Earlier in the week, some of my work strained my left knee, which I frequently have problems with. But I was still confident. Then Friday turned out to be the day for me to spend the majority of eight hours driving a pick into ground frozen over a foot deep--to backfill a foundation where a track-hoe could not get to. That, of course, further stressed the knee (and my back).

Maybe foolishly, but still I was certain I could make it to the top of the mountain.

Then, Saturday morning, there was the threat of rain until late morning. I planned on an eight hour walk and knew that it would be dark shortly after 6 pm--sooner if I was still in the woods. So I could not wait for clear skies too long. Still determined (or just plain hard-headed, I don't know), at shortly after 9, though the mountain could not be seen from my house (picture above) I could not wait for clear skies any longer. If it was going to rain, it would have to chase me out the mountain.

It was a warm day, about 42 Fahrenheit (at 3000 ft above sea level). The moist air and the wind made the temp feel much cooler. Of course, at the top of the climb (above 6500 feet) the weather would be more like northern Maine or southern Canada, so I wore a light, long-sleeved, synthetic thermal pullover, carrying more layers with me.

I also know that no matter the weather report, these mountains create greatly varying pockets of weather. I have come up the mountain in a heavy cloud mist, to stumble onto a ridgeline where I could see that on the other side of the mountain the skies were clear. I watched the clouds falling down the mountain on my side come into being as the cold wind blew through the trees. I have also walked up from a sunny valley, only to walk into a blizzard up top. 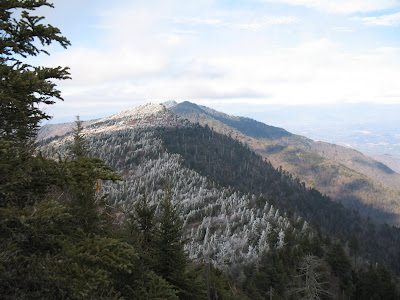 For whatever reason, I wanted to go up and old trail that I spent 50 hours chopping out a few years ago--to a nice 3 foot wide trail. Of course, Rhododendron are notorious for reclaiming what is taken from them, as you can see (and this was the easy part of the trail). 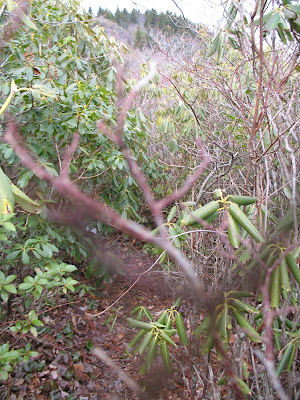 I find that I must be careful what I think about when walking the mountain. It may be that in a state of much less filtered consciousness, thought to manifestation is more fluid (if you believe in such).

On my way up, I saw a old logging road and wondered where it lead to. As I had my plans for a destination, I went by the road. At one point, I wondered off the trail looking for the cover model (a tree with character perched on top of a large stone) for my book, Strike a Chord of Silence. 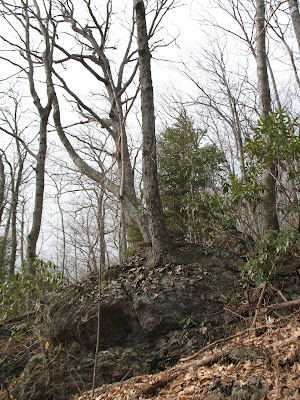 I wandered from interesting tree/outcropping to another, and then another. Then I was lost, with no choice but just to walk downward, trying to locate my trail. Eventually, where did I come out, but in the very road I wondered about but bypassed. I was glad to have my 'question' answered, but it cost me an hour in an already tight schedule.

Fortunately, the weather was being kind to me. Half way up, the clouds were just sitting atop the mountains. I love to walk in the clouds like that. Now I was certain I was going for the long walk, despite the impact to my schedule. This would mean that I had to walk steadily (no breaks--except 1 minute to take a picture here and there) until I got home. 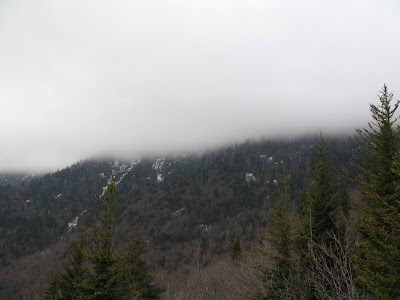 FYI, here is a shot of the valley that I live in. 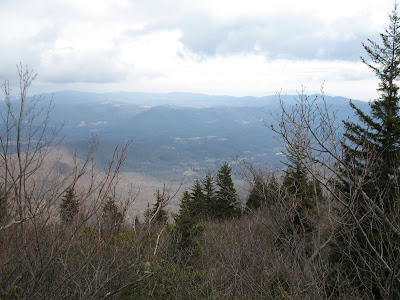 Well, there I go, through the thickets, planning on about eight hours without stopping--eating and drinking as I walk. Now, above 4000 feet (all but a very small part of the walk), I found that where there was no ice, the ground was as hard and slick as ice--kind of like 'black ice' when driving on the highway. It looks safe enough, but can provide a really trick ride if you are not careful. These conditions were complicating my walk, but there was so much beauty on top of the mountain that I had to go on. 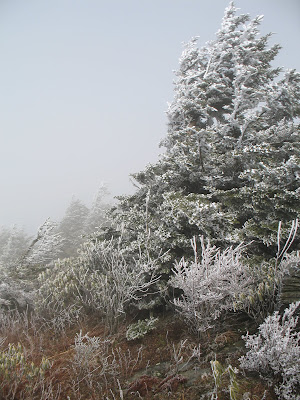 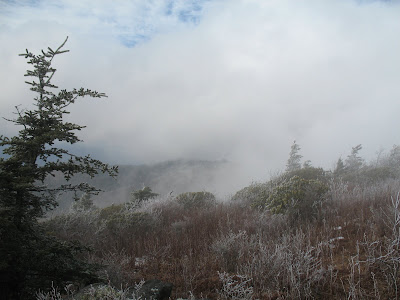 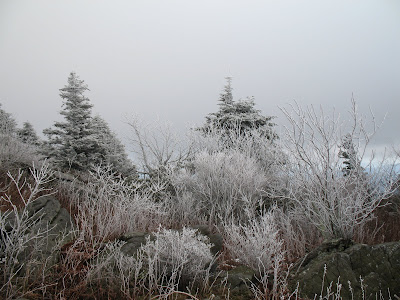 It was getting dark, over eight and a half hours later, after walking the whole time. The mountain had had some fun with me--on the ice, spooking me with a couple of really tricky thickets--but despite it's laugh at my grand plans, it returned me home gently and whole--actually more whole than I left.

Despite the foolishness that I take up with me, the mountain has never failed to gift me with wondrous treasures--and at least a little learning. This time up, I realized just how much my experience on the mountain is parallel with my experience in my communities online and offline. I could never achieve my high places and joys if I were completely reliant on my strength and ability alone. The members of the community of the mountain, and of my life, lift me up, support me, and carry me.

Many thanks to all my friends, in every form, and without form.

C.G. Walters primarily writes fiction that focuses on the multidimensionality of our loves and our lives. Autographed/signed copies of his current novel, Sacred Vow, are available from the author– or purchase from Amazon as ebook, paperback

Please join me as a friend at any of my other favorite hangouts: Facebook, Gaia, Myspace, StumbleUpon, Friendfeed, Twitter, Plurk, or Digg

Wow, CG. Now I understand why your blog is called "Into The Mist". Those photos were awesome. I wish I lived somewhere I could just walk into the mountains.

And it's great that you're writing a book! I love the title already.

That's it, Daphne. In the Mist I return to the best of myself, whether the mist of the mountain or the mist of centering/meditation
Into the Mist: Find Your Center: Find Your Peace http://kathmandau.blogspot.com/2008/01/find-your-center-find-your-peace.html

I wish that for you, too, Daphne...in the physical or the spirit.

PS...I already wrote/published Sacred Vow, and have several more in the works. Thanks for the kind support.

Hi CG,
I love this! What a wonderful place you have to connect with nature. To really get out and feed your soul. And I love the thought of how the mountain has returned you home more whole. What a wonderful gift to receive from this place of beauty.

Thank you, Lance. Yes, I am truly blessed.
The mountain calls me forward, heals me and entrusts me with many gifts.
I am very grateful.
Happy Chinese New Year of the Ox!!! Blessings to you and all you hold dear,
CG

What a beautiful journey. My family live in the Italian Dolomites and in a couple of weeks I will be taking my own moutain journeys. I find it very humbling and the best dose of 'perspective' ever.

Have a wonderful trip, ELM!!! How fortunate.

Yes, the mountain humbles me as well as lifts me up. I definitely agree, give me proper perspective.

Enjoy your walks in the mountain!
blessings to you and your dear ones,
CG