Of things done with smoke and mirrors,

they only serve to soften the realization that magic exists-- 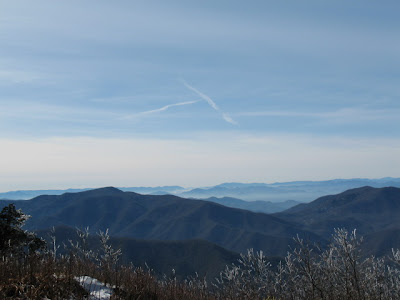 A few years ago, without any particular intention, I was spending my time hiking deep into the mountains, meditating long silences, doing a little Tai Chi, loving my dear wife, and generally enjoying my life. In this field of grace I was given a gift of magic. Without any effort or skill on my part, a beautiful tale of wonder and mystery came to me. In the experiencing of it I felt a communion with the mystery of love itself. The experience was to become my novel, Sacred Vow.

Once this tale/experience manifested, I published it, feeling that the resulting book would share that field of the mystical that I experienced. The initial responses to the book were very good, but I was also told by the reviewers that I must now be ‘responsible,’ do the ‘this world’ work of a writer—if I was going to take on the mantle of a writer. So...I put much effort into my responsibility. And, in that great endeavor, I slipped from the field of grace…that gave the magic, gave the story, and gave me joy without effort.

The mountain has invited me back to the place of mystery, and I am reclaiming my greatest responsibility—to experience joy and magic.

Blessings and magic, dear ones,

Here are a few images of my latest trek up the mountain—officially the Woody Ridge Traill, but also called the Horse Rock trail (because of a rock outcropping, Horse Rock, but could as well be so named because you need the lungs of a horse to get to the top of without making a day of the hike...brutal, and beautiful). 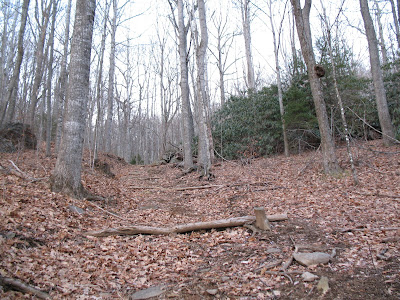 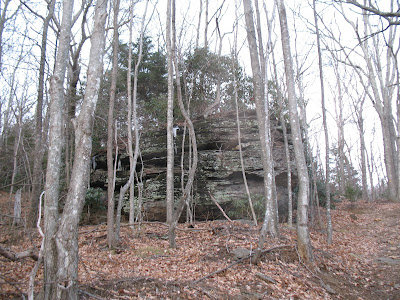 The trail starts up some old logging roads....
..but soon becomes a little more demanding... 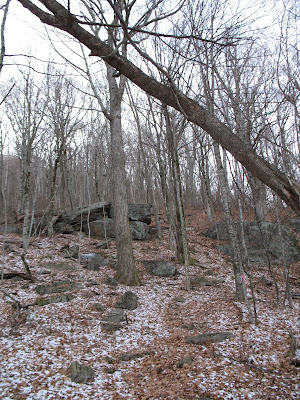 The stones here are when things get very tricky.
For the hundreds upon hundreds---upon THOUSANDS--

of yards now, one will most often be on all fours. 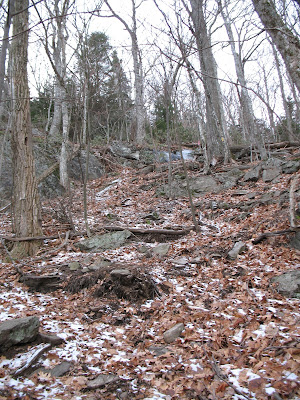 Along the way, greet the grand guardians of the trail... 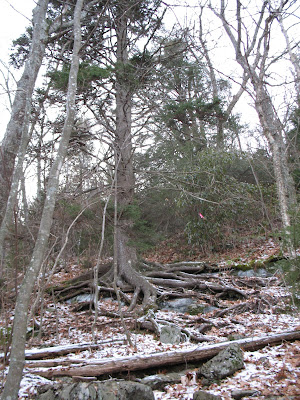 The ice, leaves, and snow cover makes the ascent tricky,
which had me wondering, "how in the &%*@ did I get up here?!?!! 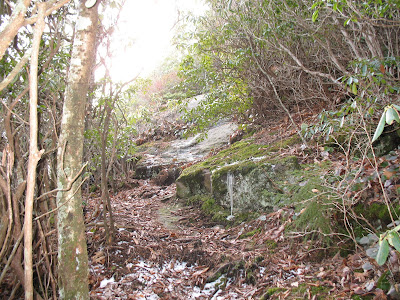 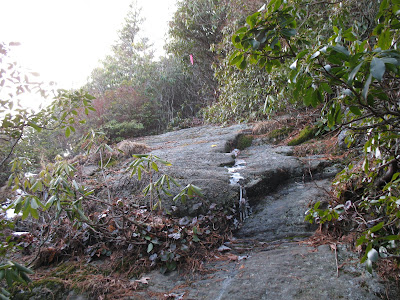 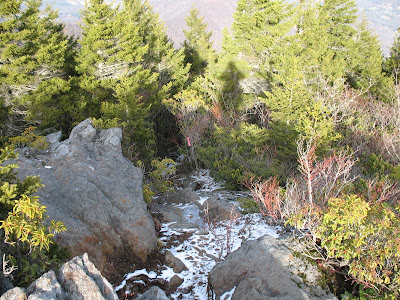 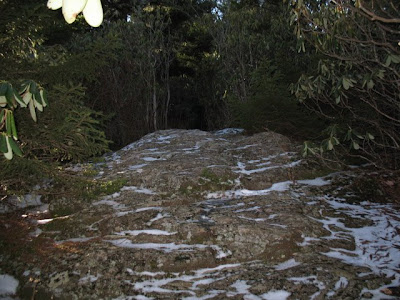 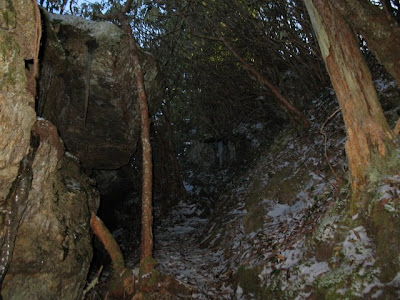 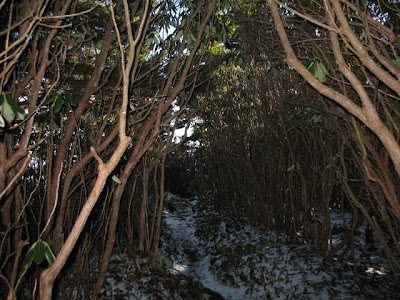 Once on the top, you're walking the
Black Mountain Ridge Crest Trail,

that will take you along the tops of the tallest mountains on the East coast. 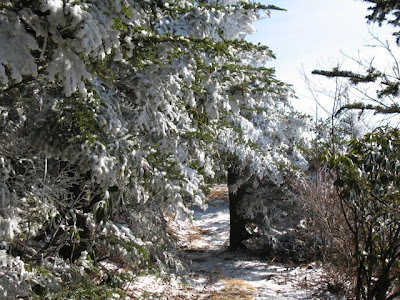 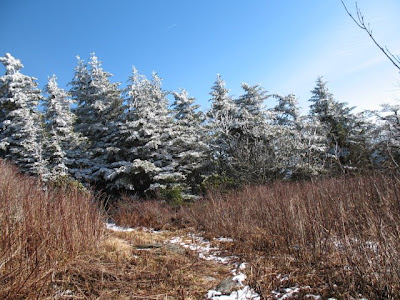 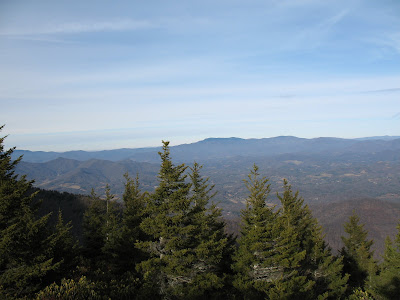 ...beautiful views on all sides... 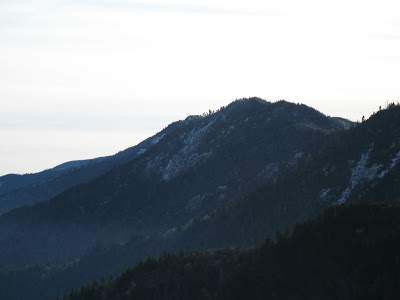 ...Winter Star Mountain (where I was last week) 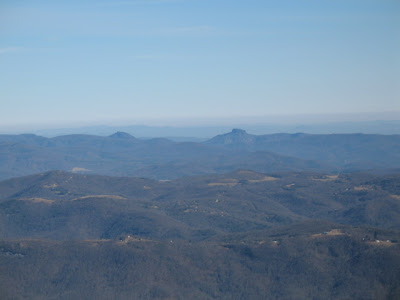 ...off in the distance, TableRock, where the last scene of

"The Last of The Mohicans" was filmed.

Route Description: There are no signs indicating the TH and there are multiple logging roads on the first 1/3 of hike (up to the "large rock"). It is steep and it is confusing. At the base of a large rock is a great spring. At this rock is where the trail really steepens. The switchbacks on the South Toe trail map do not exist. The middle 1/3 is the worst, it eases up higher on the ridge. The trail makes the crest between Horse Rock and Gibbs Mt. there is a trail sign at the edge of the woods, about 100 yards from the crest trail. At the summit crest go left (south) to Gibbes Mt. The Woody Ridge trail is not blazed, and not maintained except from walking (Hispanics who frequently collecting Galax. Heavy bags and huffing it down the trail.) You gain 3300+ feet in 3 miles. In my opinion the Woody Ridge trail is the steepest, most sustained climb in the south. The only other trails I can think of that are steeper are Pinch In and Sandy Flats in Linville Gorge (but these are shorter). That being said, the views from the summit and Horse Rock are absolutely without comparison on a clear day. Closest water on Bowlens Creek trail about 3 switchbacks down off Celo down the trail. Or fill up at the spring at the base of the rock before the climb ramps up. The route has plentiful downfall. It is poorly maintained

For more information and video clips (by someone else) of "Horse Rock" trail http://www.summitpost.org/mountain/rock/303921/horse-rock.html

There is certainly something about nature that is magical, and for me, very grounding. Thanks for sharing these very magnificent pictures, and I'm also sure they don't do justice to being there, and really experiencing the beauty that is offered...

Very true, Lance...these pictures are so minimal in the experience of having the open mountain before you--the energy of the landscape is remarkable, the wind, the sounds, the feel.
Nature is also very grounding (and uplifting) to me.
blessings to you and your dear ones this week,
CG