Gift of the Bear 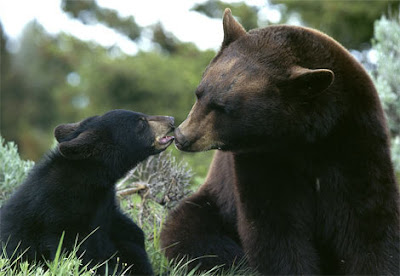 Thanks to my friend Lynnette Kirkwood (Lightning Bear Woman)
Though this is not the mother and baby pair that I encountered, 10 hrs into my hike--on my way home--I was walking down a hill in the woods and started to look for the sound that I heard rustling in the leaves to my right. The landscape was very irregular, so after a bit more walking I could see clearly it was a young mother bear and her cub. They were just walking along, noses to the ground, looking for food.

I stopped, and they kept coming toward my trail. They were only about 60 yards away. I thought, obviously she does not smell me--but then I probably smell like a bear after 10 hrs of walking with a heavy pack!

I knew it would be best to make sure she was not startled by me, for she might feel her cub was threatened, and that would cause her to be aggressive.

I cried out a two-note animal call (from my childhood farming)---"ay-ooh, ay--ooh!"
She looked up, curiously, like 'what kind of animal is that?'

Still she did not seem afraid and not inclined to be aggressive. In fact, she seemed quite friendly.

I wondered just what she thought she was seeing. After a bit, she turned quickly and the little one went running away from me. However, she only took about three gallops, stopped and turned her head back to look at me.

I assumed that she was making sure I was not going to pursue, that her baby would escape safely. Yet, she still was not tense, made no sound. Her look back was almost more a saying good-bye.

I continued to walk down the trail, the rolling landscape soon hiding her. I send her and her cub blessings and protection as I heard them continue their walk, as I did also.
Posted by CG Walters at 6:01 PM

Wow..this story really touched my heart. I like to think the mama bear was curious and maybe even wanted to show off her cub. I know that's not common, but the story made me wish for it. Just when we think we know all there is about animal and human communication; there's always a surprise. Thanks for sharing this:~)

Thank you, Sara.
The bear gave me a give of her and her cub's presence, acceptance.

I was sad today when I was up on the mountain in that area and the bear hunters had their dogs running the area. I was worried about the bear family when I saw them yesterday, and hoped they would get far enough into the hills before hunting started.

Oooh, I would love to hike with you...

Perhaps we will sometime, Julie...I have to spend less time on the mountain this winter and more time 'hiking' the terrain of my next novel......
blessings and joy....
CG